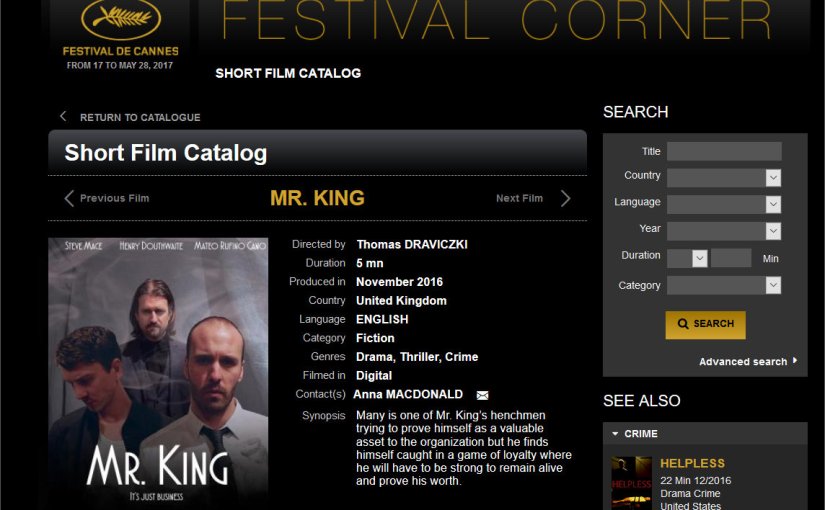 Our short film, Mr King, has been accepted for a catalogue entry at Festival Corner at the Cannes Film Festival, as can be seen in the header image, above.

From an original script by Ron Zlatkin, the film was directed by Thomas Draviczki and co-stars Steve Mace, Henry Douthwaite (in the title role) and Mateo Rufino Cano. As First Assistant Director (1stAD), I was responsible for casting.

I noticed that the theme composition has been uploaded by Flórián Siró so here it is for you to enjoy.

Following on from the previous post (2-minute Film Project) where I mentioned this project, I’ll now go into more detail. The film is called “Mr King” and was filmed over a long weekend, from Saturday 5th to Monday 7th March, 2016.

The script was submitted by Ron Zlatkin (Dutch), then Tamas (Thomas) Draviczki (Hungarian) won the pitch to direct it. As 1stAD, I was responsible for casting and we advertised, via various channels, for actors to apply for one of the three main roles by submitting their CV and showreel. There were more than 40 applications which were shortlisted to ten, then those actors were provided with a page from the script and invited to audition for their chosen role.

The standard was high and the three actors who were offered and accepted were excellent! (Keep in touch, guys!) They are:

The script needed improvement. I was asked to edit the script and also added some dialogue (hopefully, I’ll be credited 🙂 )* and the shoot went very smoothly. I went straight from this film to working on two others… then a few days off to recharge!

Here’s an excerpt from the edited script:

Viktor closes his eyes and leans back on the chair as he
accepts his fate. Mr King Pulls the trigger three times.

MR KING
“Well, credit where it’s due, you
are very dedicated to this guy. Or
is there more than one? Who are
they? The club owners? They run out
of money? Or maybe the associations
are jealous that I make more money
than they do? Guess I’ll never
know… Oh. Silly me. I forgot the
bullet. What am I like?”

Editing begins next week. As usual, as soon as we get the green light to publish, I’ll let you know.

*Unfortunately, I’ve been told that it’s not Academy policy  😦 so I remain uncredited again.